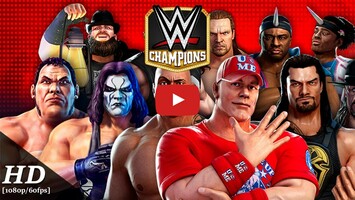 Advertisement
WWE: Champions is a match-3 game featuring famous WWE wrestlers. Basically, you have to match colorful gems to help your fighter defeat his opponent in the ring of World Wrestling Entertainment.

The gameplay is simple: you make your fighter hit his opponent by matching like-colored gems. If you manage to get the other guy's life bar to zero, you win. But of course, when it's your rival's turn, he gets to move and hit you back, so you have to be careful.

One of the best things about WWE: Champions is its awesome selection of characters. You can find WWE wrestlers from different decades, including names like The Rock, Undertaker, Macho Man, Randy Savage, John Cena, Triple H, Big Show, and even Andre the Giant. You can play as anyone of them. You can also level them all up and improve their attributes.

WWE: Champions is an outstanding game. The gamplay may not be especially original but the quantity (and quality) of the characters you can choose from, along with the different different game modes and excellent graphics make it an essential app for any WWE fans.
Reviewed by Andrés López Translated by Sarah
Advertisement

Why is this app published on Uptodown?
(More information)

this version is not working in my phone Jun 19th, 2016 Puzzles and wrestling heroes get together in WWE Champions

Sprinkle Islands Free
Put your firefighter's hat back on
Brain Out
Surprising levels that will test your logic and creativity skills
Farm Heroes Saga
A lot like Candy Crush Saga, but with colored fruit!
Slug it Out!
Puzzles and slugs, all in one game
Water Sort Puzzle
Sort the water by color inside the different cups
CubeX
Solve any Rubik's Cube on your smartphone
Angry Birds Journey
Launch birds at the evil pigs to recover the magic eggs
Candy Crush Jelly Saga
The classic Candy Crush, now with gummies

EI Plus
The best soccer and other sports are in store for you
Puzzle Glow
Plumber
Combine pipes in this classic game with a realistic look
My Chu - Virtual Pet
Adopt a little pet that will steal your heart
Sea Wars
Peanuts: Snoopy's Town Tale
Adventures with Snoopy and friends
Solitaire - Grand Harvest
Solve the solitaire games and grow your farm
Pack The Ball